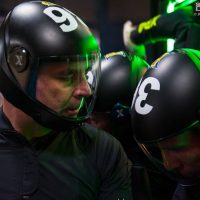 Kirk Verner was pretty much born with a closing pin in his mouth. He’s been “on the drop zone every weekend as long as [he] can remember.” It’s no wonder; Kirk inherited one heck of a skydiving legacy. His dad—[Dave] Verner—started skydiving in 1960. The elder Verner opened his own dropzone in ’65: the now-closed Archway Skydiving Center in Sparta, Illinois, which once sat amongst the farmlands near St. Louis. Kirk was born the next year, in 1966—so he’s never really known a day away from skydiving.

Kirk spent his childhood out at the airfield, either packing or jumping out of the mockup: “totally immersed, from a very early age.” Even so, he held out for that first leap. Kurt was a wise old 16 when he saw the underside of a parachute for the first time.

“My parents weren’t the kind of people that would let you jump before the rules allowed it,” Kirk explains. “And at that time, the USPA said you could jump at 16, so I did a standard static line progression on a round parachute. Not long after that, we got square canopies for the students. I transitioned to squares pretty quickly. Thank god, because it wasn’t nearly as much fun jumping the rounds. They hurt.”

Sparta was a small town then, and one of its claims to fame was the skydiving center. Everyone knew that the Verners had the skydiving center there, and the young Kirk’s hometown status quickly leveled up once he started jumping. (He even jumped into his homecoming football game.) The dropzone would bring an average of a hundred people to the town every week, week in and week out, so the Spartans were, understandably, “really supportive.” The dropzone thrived there for 40 years until the elder Verner semi-retired and sold the place. Sadly, the DZ didn’t survive the transition.

With that pedigree, Kirk was destined to compete. He went to his first nationals in 1988 to compete in the 4-way RW discipline. The team made 150 jumps or so and held up the back of the pack for a couple of solid years. By 1990, Kirk was chomping at the bit to get to the front.

It must have been fate. In ’91, Kirk ended up getting on a 20-way with skydiving legend (and author of Above All Else) Dan Brodsky-Chenfeld. The two jumpers “really connected.” At about the same time, Kirk and his 4-way team pulled a bronze medal in open, which was “kind of unheard of” for a weekend team. Despite that unprecedented success, the team was starting to come unglued.

“The guys on team were starting to do other things,” Kirk says, “So I was a little bit in limbo.”

Then, in April of ’92, the Otter at Perris tragically crashed. Dan, of course, was on that plane. He miraculously survived, but his all-star team was going to be missing a key member until he got back on his feet.

“I got a call from Dan when he was in recovery,” Kirk says. “He had to go in and have another surgery, but he was laying the groundwork to come back. He asked me to come out and jump with his team while he got better. I did. We went to the ’92 nationals and were on the podium again in 3rd place.”

“Not long after that,” he continues, “I got another call. The team that had won—Vertical Speed, from DeLand—were training for the world meet, and a guy wasn’t keeping up with the pace. They wanted me to replace him.” They didn’t have to ask Kirk twice. He hustled down to DeLand. Once there, he ended up building bridges between his old friend Dan and fellow coach/competitor Jack Jeffries. Dan and Jeff were rivals at the time–but, before long, Kirk and Dan and Jeff were planning to form a new 4-way team together. They found a fourth member in Mark Kirkby. That new team was called, of course, Airspeed. It was December of ’93.

“Then we started looking for places to go,” Kirk says. “We wanted 700 jumps to train. Perris was embroiled in the lawsuit with the crash, so it was clear they couldn’t do it. DeLand was offering 400 jumps. Then Larry Hill came forward from the dropzone over in Eloy. He offered us 5,000 jumps and threw in accommodation.  We were like, ‘Okay, We’re going there.’”

Eloy (Skydive Arizona) wasn’t a power-player dropzone at the time. In fact, the drop zone’s very first turbine aircraft had just arrived, and Larry was determined to ride the wave.

Airspeed got to Eloy in January of ’94 and started jumping “like maniacs.” They won the 1995 world meet and immediately decided to take on the big dogs: the Golden Knights. With that goal in mind, Kirk and his cadre formed an 8-way team in 1996. The Knights “put a beatdown on [them].” In ’98, however, the tables turned. The healthy rivalry continued for years, progressively driving up the quality of RW jumping along the way. Airspeed–now Arizona Airspeed–holds the rarified position of one of the winningest skydiving teams on the planet.

It was a golden time for Kirk. For Airspeed’s second world meet in 1997, the team ended up in Turkey, in the ancient Roman town of Efes. They were jumping tailgates—a big Casa 235. Kirk still remembers the jump, clear as day.

“Like in any other airplane, at the exit you’re kind of bent down and twisted up, getting ready. I remember us getting to the tail-gate—Dan and I, facing each other, waiting for the green light. It was so surreal in the sense that we were just standing there about to have the biggest jump of our life, face-to-face, waiting, but it felt so casual. I looked at him and said hey, have a good jump. He smiled and said it back to me, and we got off the tailgate and shredded it. It sounds so simple, and it was, but in my whole career, that’s one of the moments I remember the most.”

“Wendy Smith from New Zealand was working for the IPC at the time,” he continues, “And she was following us off, standing behind Dan. I remember having eye contact with her. She told me later it was the most intense feelings—the energy of Dan and I in the door. Bizarre.”

A few years on, Kirk was turning 40. The wear and tear of those 1,200 training jumps a year was starting to take its toll, and he was looking out for new horizons. They were imminent. At the 2005 nationals, Paraclete XP tunnel owner Tim D’Annunzio–who had been competing in the comp with his son–approached Kirk with a proposition. 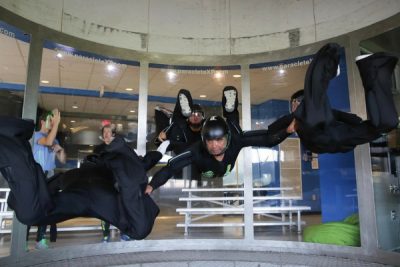 “Tim mentioned to me that he was thinking of building a big wind tunnel in Raeford. He asked if I wanted to come over and work with him,” Kirk recalls. “I said yes, of course. I’ve been here ever since. I really love it. I couldn’t be happier that I came here.” When Paraclete took over management of what would become the Paraclete dropzone, Kirk naturally transitioned over to run it.

“I’m not much of an indoors, sitting-at-a-desk kind of a person anyway,” he laughs. “I need to be up and about. I still make 600 jumps a year, and I train with some player-coached teams. In between here and the tunnel, I am working some solid days to say the least, but it is really, really fantastic. The owners have really good vision. They are great for the sport.”

Now Kirk’s kids are tunnel stars, too. His oldest son, now, 23, holds world championship gold in 4-way dynamic. His youngest son, 12, also flies in the tunnel, as does his daughter, 17—who works at the front desk of the tunnel. 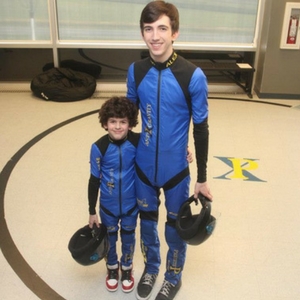 “She is the most natural of all of them,” Kirk enthuses. “She takes to it really quick.”

Gold medals, an amazing job, great kids–Kirk has the world at his feet, it seems. “I have gotten to go all over the world with skydiving, which is great,” he grins. “I still travel a lot for coaching. These days, I have people come over to my home that aren’t skydivers, and they ask the usual question: what I do for work. I tell them I’m a professional skydiver and they’re, like, wait—skydiving paid for all of this?! I am, like, yeah. It did.”

For a man as successful as Kirk, he has a very down-to-earth perspective on it all.

“I’ve got four world championships,” he laughs, “But that and $4.50 will get me a cup of coffee at Starbucks. You can’t be arrogant about stuff like that because it doesn’t matter. There’s a great big world out there. You have to keep things in perspective.”

Interested in training with Kirk? Our team training packages are designed to give new or veteran competitive teams the edge at that next competition! These package combinations include both training jumps and tunnel time. Paraclete tunnel+sky training packages can save your skydiving team hundreds (or thousands!) on your next training camps. Contact Kirk at kirk@flyxp.com for more details. 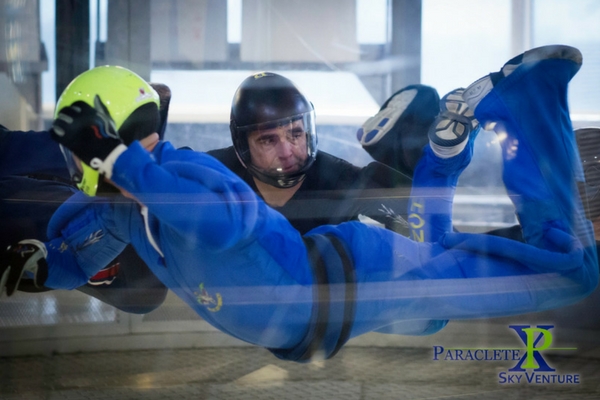 Top notch! Instructor John was awesome! There is nothing like soaring, weightless. Staff was great and I even got to watch some of the pros practicing formations before we flew.