Over recent years indoor skydiving has grown exponentially to become its own sport. While body flight training indoors remains connected to skydiving, the unique environment it offers and the way the vertical wind tunnel works means that people are learning much faster and athletes are routinely performing moves that even just a short while ago were not thought possible. The tunnel offers a specifically controllable environment in a few very helpful ways — such as being able to train for longer periods of time and to do so under the direct supervision of a qualified instructor. Perhaps most importantly, the way a wind tunnel works means that the wind speed can be very precisely controlled to aid in the learning process.

Gravity makes things want to fall at the same speed, but the reason they do not is because of air resistance. If you drop two items that weigh exactly the same but one is smaller than the other, then the small thing should fall faster because it has less air to push out of the way. If you drop two objects that are exactly the same size but one is heavier, the heavier thing should hit the ground first as it has a greater density. This works in the same way with people – there are bigger ones and smaller ones. There are also tall people that are quite light, as well as smaller people that are all muscly and heavy. The end result is that we all fall at slightly different speeds.

How fast you fall also depends on what you are learning. Some of the body flight orientations, such as belly flying or back flying involve more air resistance and are therefore slower than more advanced positions like flying over your feet or going head-first (head-up and head-down, respectively). Wherever you are in your flying career, each and every move that you practice will have an optimum wind speed on which for you to learn and perform it. Over time, and with repetition, you will become increasingly comfortable flying particular moves in the various orientations across a gradually widening number of wind speeds — able to perform them while falling both faster and slower. This allows you to more readily fly with others as you can meet in the middle between your best speed and theirs, or you are even able to fly at their most comfortable fall rate if you are the more advanced flyer. This is called expanding your range.

If you are new to indoor flying and how the wind tunnel works, you don’t need to worry about the technical ins-and-outs of managing wind speeds. Your coaches and instructors will know exactly what you need and arrange it for as long as it is necessary. There are two qualified people in charge of every tunnel session: the instructor and the driver. The instructor is the one inside the chamber with the flyers and the driver is the one in the little booth where the buttons are. While the instructor inside the tunnel does the hands-on part of the session, it is the driver’s job to support them properly by monitoring the time and controlling the wind speed. As it is too noisy to speak with each other, communication between the instructor and driver happens via a series of hand signals that are used most often to request a percentage of the total power the tunnel can offer. The driver is almost always another fully qualified tunnel instructor, and, if they are paying the correct attention, they will be able to adjust the wind speed throughout the session with only minimal input from the instructor. 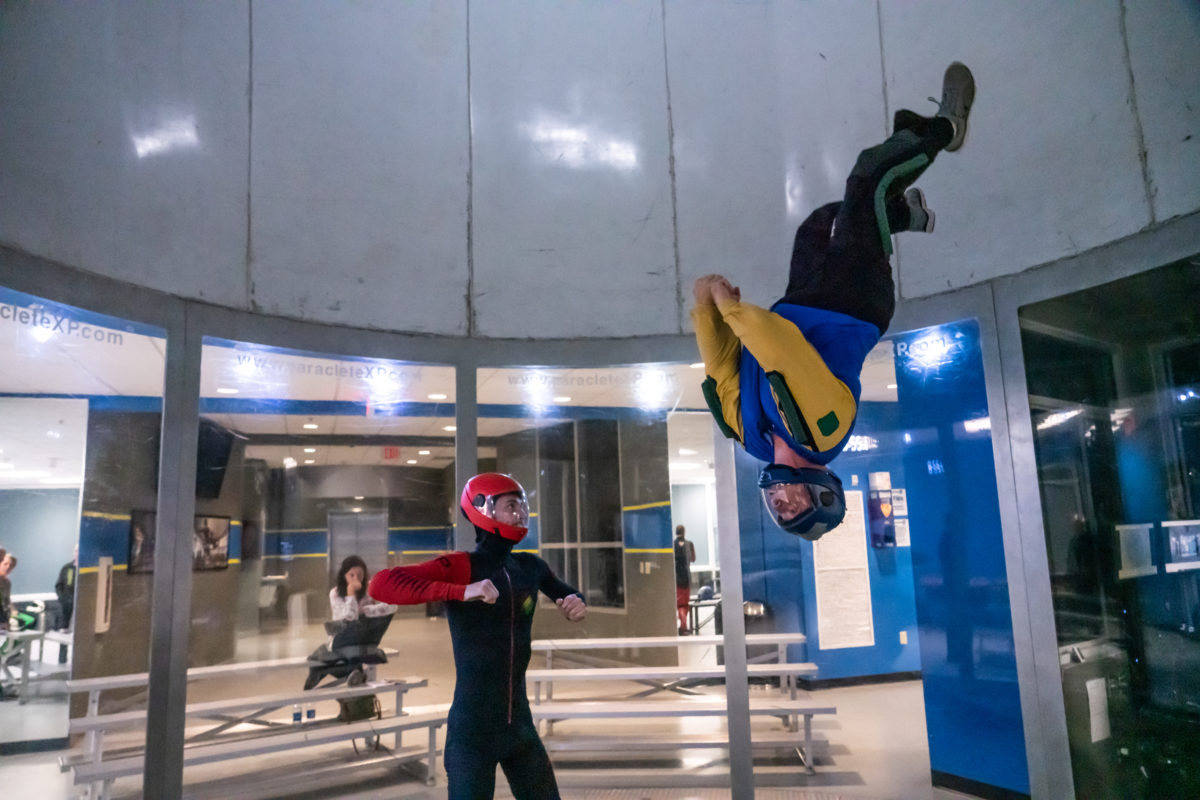 As a flyer, you will not be expected to be all over the intricacies of wind speed management until you have covered a bit of ground in your personal training. However, it works in your favor to spend some time learning about it sooner rather than later. Not only will this knowledge give you a better insight into what ultimately can get very tricky and technical, it demonstrates a level of self-responsibility and awareness to your coaches and instructors that they will pounce on — seeing an opportunity to share their valuable knowledge with someone that puts in that extra effort.

Vertical wind tunnels have become an essential training tool in which it is possible to progress your flying skills very quickly and efficiently. The tunnel is a giant microscope under which it is possible to analyze things on a macro level, and the ability to control how much wind speed we use is one of the most valuable parts of the sophisticated training methods. This allows our instructors to tailor your training into the very best form. When you visit, make sure to learn your speeds and why you are using them. It will help your progression and make you feel in control of your sessions.

I was also shocked to see children, barely old enough to go to school, doing great in the wind tunnel! When the instructors take a minute to show off, you’ll be amazed.