PJ Jackson is living the dream, for sure. This rockstar athlete/coach/organizer lives and works at Paraclete XP full-time doing exactly what he loves: flying.

One of the reasons he’s so beloved around here (and sought-after in general) is that PJ’s skills are pretty uniquely “ambidextrous” between the wind tunnel and the sky. That makes Paraclete just about the perfect place for him to be, as he describes his focus as “70% tunnel right now,” but the 10,000+ skydives under his belt allows him to move frictionlessly between the two disciplines and bring his thorough, accessible coaching style to both sides of the Paraclete coin. But who is PJ Jackson, anyway? We think you’ll be as inspired by his story as we were. 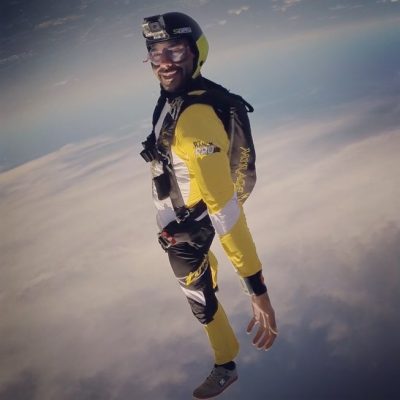 PJ’s first skydive was a long-awaited tandem in 1997. He’d been hankering to jump out of an airplane since childhood, when he saw the original Point Break on TV.

“It was so cool,” he remembers. “I saw people flying and interacting and having fun in the sky. It just blew my mind.”

Fast forward to a couple of years later, when the teen-aged PJ is working in the electronics department of a department store. One day, all of the display TVs were playing a skydiving clip He watched, over and over again, as every single TV on the wall played video of happy people jumping out of a Cessna and flying around together. He started counting down the says remaining until his 18th birthday.

When he finally made it to that eighteenth cakeday, he drove three hours to the legendary Jumptown dropzone in Orange, Massachusetts. It was a Wednesday. They weren’t even open. Deal-breaker? No. PJ drove all the way back on the weekend.

“I was opened up to the sport of skydiving that day,” he says. “I got to watch all these teams doing their thing–people jumping together. I couldn’t believe it was a sport, not just a one-time thing. It was really cool.”

Being young and living in a super-seasonal part of the world, PJ’s start in sport skydiving was a little on the slower side. From 1997 to 1999, he was only able to eke out a couple of AFF jumps. In 1999, however, he moved to Florida, and that’s when it really started (quite literally) heating up.

“When they were building SkyVenture Orlando, I happened to be living right there,” he says. “I used to sit at the bus stop across the street from that thing wondering what it was they were building. When I finally found out it was a tunnel–and what that meant–I was, like, oh my god.”

It was in that tunnel that PJ insists he really learned how to fly. Whenever he could afford it, he’d huck a two-minute flight. He amassed quite a few.

“Learning how to fly in the tunnel early during those AFF jumps and then coming back to it with that knowledge was huge,” he insists. “I was at my AFF level three, but the tunnel experience let me rock it through the rest of those AFF jumps, no problem. That’s how I started off. Getting confidence in the tunnel and then transitioning into AFF.” 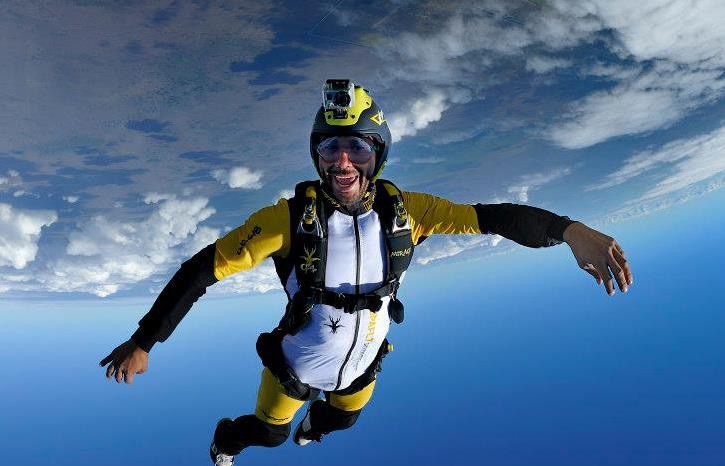 When PJ moved back to Massachusetts in 1999, he picked up a better-paying job and started skydiving in earnest. From then on, skydiving was an every-weekend thing–and it remains so.

These days, PJ is a professional, full-time skydiver. He has had that distinction since 2008, when he chuckles that “the economy forced [him] into it.”

“I was working construction with my father,” he explains. “He had a general contracting company. Before I was skydiving for a living, I was working for him doing managerial-type stuff, dealing with customers, contracts, and estimates so he could be out in the field working. I was the heart of his office. I did that for ten years. He was super-supportive and always gave me Friday, Saturday and Sunday off to go skydiving.”

Then, around 2008, the bottom dropped out. No one was spending money on their house.

“I had always done video work on the drop zone to support my jumping habit,” he goes on. “Four or five years into the sport, I started shooting video just so I could pay for jump tickets. When it got really bad with construction, and we were going months at a time without work, I was like, Okay. if I go to the dropzone on Thursday, I can make a hundred bucks. That’s better than not making any money at all. Soon, I was doing that on Thursday, Friday, Saturday and Sunday. I was making the same amount of money shooting video as I was with my dad–and this was way more fun.”

Before long, PJ decided to head south to Florida for the winter to that state’s perpetual skydiving season. It was something of a long shot. After all, he didn’t have any ratings. He did it well, but all he did was video: not instruction of any kind.

“I found it really hard to break in,” he says, “but I had a friend in DeLand who said, I can’t promise you anything, but if you come down and are ready to work, you probably will get some work. So I just showed up. Long story short, it worked. I ended up doing videos.”

“I had been freefly coaching a little bit in New England, but it wasn’t anything substantial,” he adds. “I crossed fingers tried marketing myself as a coach in Florida. I didn’t have a ton of experience back then; I just started hustling. And It wasn’t too long before people were buying a 10-pack of coach jumps. Fast forward a year later, and I was fully booked for freefly coaching, I was organizing at boogies, and I wasn’t having to work for any rotation at a drop zone.”

PJ says that it took him a good four years before he felt like he was really, truly making a go of the professional-skydiver thing.

“Then, one day,” he grins, “I looked back and said, This is it. I can’t believe I’m actually doing what my idol was doing back when I was getting coached by him. I didn’t think I could be somebody who was a freefly coach and earning a respectable living. I was always trying to make the same kind of money I was making in construction. Now I’m making a real living doing what I am completely passionate about.”

As for us at Paraclete XP, we couldn’t be happier that PJ has found a home here that fulfills his talents so completely.

“Paraclete XP is an awesome place,” he smiles. “I’m here because it’s a dropzone and tunnel in one. I moved here just a couple months after [the Paraclete XP owners] bought the dropzone because I wanted to be at a place that had both tunnel and sky.”

“It’s great for me here as a coach,” he continues, “because I’m passionate about coaching, and coaching is what we do here, not carnival rides. Every day, I get the chance to coach and help people improve. Up here it’s all about training, not just enjoying a once-in-a-lifetime experience.”

If you’re a newer jumper who sees PJ as the ultimate example of what you can become in the sport if you work hard, you’re not alone. Newer skydivers often ask him for his advice: And boy, he has some good words for ‘em.

“Everybody takes their own time,” he insists. “There is always going to be someone standing next to you that seems like they are doing awesome, and everybody will be talking about how good and how quick this person is and you’re over there feeling like getting better is hard work. But don’t let that keep you down. Everybody follows their own path. The important part is the journey, so enjoy while it’s happening. Don’t compare yourself to other people so much. Everybody takes their own time.”

Paraclete XP is proud to have PJ Jackson on our rockstar team of skydiving coaches. If you’d like to work with PJ to improve your performance in the tunnel and/or the sky, don’t be a stranger! Ask the desk to put you in touch with him. Contact us today to meet PJ.

This is a must do! If you want to skydive without jumping out of a plane, this is the place to do it. The staff are very knowledgeable, friendly, helpful and just plain awesome. I can't wait to go back for another flight.