Get to Know Our Very Own Manny Jacobs

Both America and Australia are lucky to be able to count the incomparable Manny Jacobs on the team. Born in Atlantic City, New Jersey, Manny was raised in the green suburbs of Perth in Western Australia. He lived there for about 30 years or so — earning a delightful accent in the process — before moving back to the States about two years ago to join us at Paraclete XP.

“I miss Australia very much,” he admits, “But I’m very happy to be part of XP. The vibe here is great.”

Manny started skydiving in Australia in 2008. He cut his teeth in the sport at a dropzone in Picton, which is right next to Sydney. 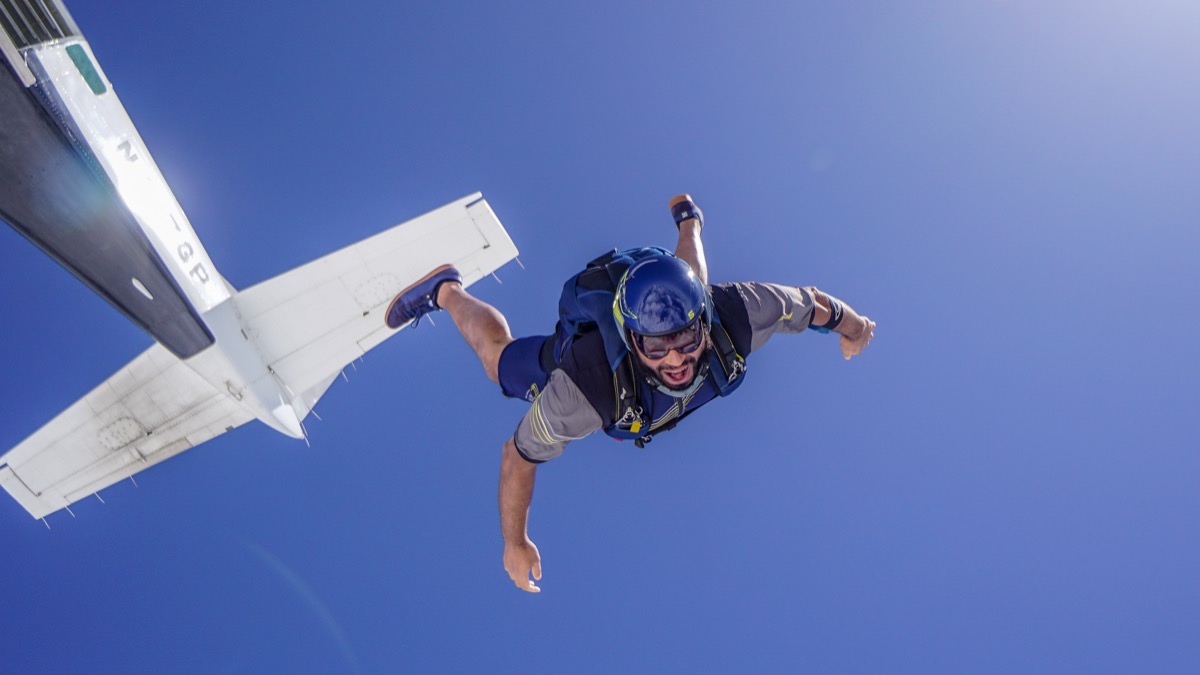 “I was in the Australian army at the time,” he remembers, “and I was in an airborne unit. I had done a couple of static line jumps through that work, but I didn’t really know anything about skydiving as a sport.”

“It is a weird story of how I got into it,” he continues. “I was on deployment at the time. I was in Afghanistan. I was kicking back one day, and a really good friend of mine poked his head into my room. He said, ‘Hey — do you want to get your free fly ticket when we get back to Oz?’ I looked at him and said ‘Yeah, sure, why not.’ So sure enough, when we got back, five of us went out to Picton to make a skydive, and now here I am. I’m the only lifer when it comes to skydiving. They didn’t last too long; I think I’m the only still jumping out of the five of us. But that was it for me.”

Taking to the tunnel happened a little bit later for Manny. At the time, there weren’t as many tunnels available to visit — not by a long shot — but Manny was lucky. He happened across one of the first recreational tunnels in 2010, when he was “doing some military stuff” out in Dubai. When the opportunity came up to get some flying in, he jumped on it. He reports falling in love with it pretty much immediately. Staying in the airflow, however, presented more of a challenge.

“At this time, we didn’t have any tunnels in Australia,” he says. “I went to [Skyventure Arizona] once to do some tunnel flying, and then I did a trip out to Paraclete XP, but I couldn’t stay because I had a job back in Oz. When I went back home, that’s about when the tunnel in Sydney opened. I did some tunnel flying there, thought pretty hard about it, then decided to come back to XP. At the end of 2016, I told my boss I was quitting and moving overseas.” 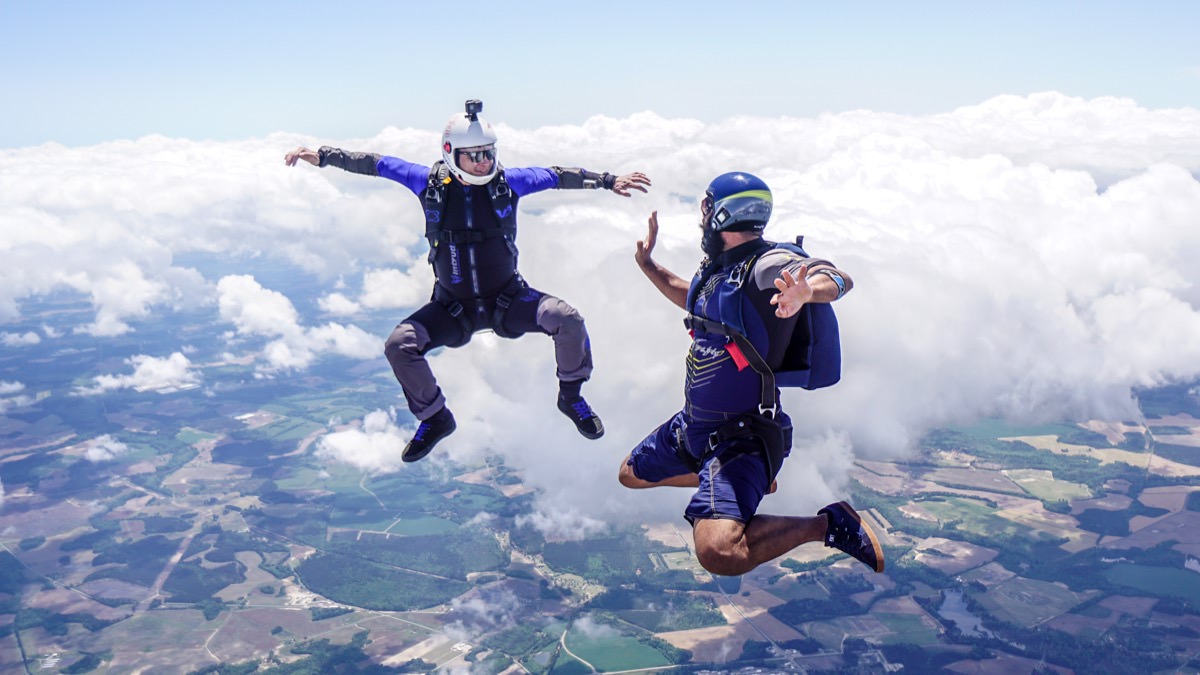 When Manny decides something, he has a will of iron. He had six months of leave left from the military, and he I took all of it. He sold all of his stuff, went home to visit his mom in Perth, jumped on a plane with two suitcases and high hopes and came straight to XP to ask for a job. The rest, of course, is history. Today, Manny is a beloved figure and sought-after coach-instructor at both the tunnel and the dropzone.

Manny’s military service serves him well in our extraordinarily military- and veteran-friendly community.

“It is really nice having the military guys here and getting to work with them,” he smiles. “They are all great, and it keeps us busy. I understand where they are coming from because that’s my background, too. Even militaries from different countries — like Australia and America, for instance — we are best mates.”

Somewhat uniquely, it’s not competing that drives Manny forward. It’s that camaraderie — and the sheer joy of teaching — that lights Manny up.

“I don’t compete in tunnel flying,” he explains. “I have been thinking about it, sure, but I’m not generally or naturally a very competitive person. I do it for fun. I’ve always been like this. When I was a younger man, I used to play a lot of basketball, and as soon as I started to get super good and the stakes got higher, I started to have less fun. Honestly, it’s not my thing to compete. I’m super laid back, and I like just being carefree at the moment. Since leaving the military, my goal is just to have fun. That’s my only real goal: to get better at my personal flying, to have fun, and to get better at instructing and coaching.”

“Teaching is great,” he adds. “That’s one of the best parts: Coaching and teaching. When we get first-time flyers, I really enjoy the opportunity to teach them and give them an experience they have never had before. It is a lot of fun.”

As much as first-time flyers enjoy Manny’s charming company in the windytube, it’s sport flyers, working through the perpetual challenge of learning bodyflight, who get the biggest benefits from working with this magnificently-bearded wonder.

“It can be a frustrating thing being in the tunnel and trying to learn,” Manny says. “It’s a frustrating thing for everyone. Things don’t always work straightaway. One of my favorite things about being a coach is when you see someone working really hard at something, and all of a sudden they get it. That light bulb goes off, and they finally feel that feeling you were trying to give them. It is very rewarding.”

It’s no wonder, then, that these days Manny is one of the favorite instructors at Paraclete XP. Skydivers and tunnel flyers travel from far and wide to learn from him — to soak up his knowledge and his magnetic energy. And Manny, for one, feels entirely at home at Paraclete’s super unique sky-and-tunnel playground. 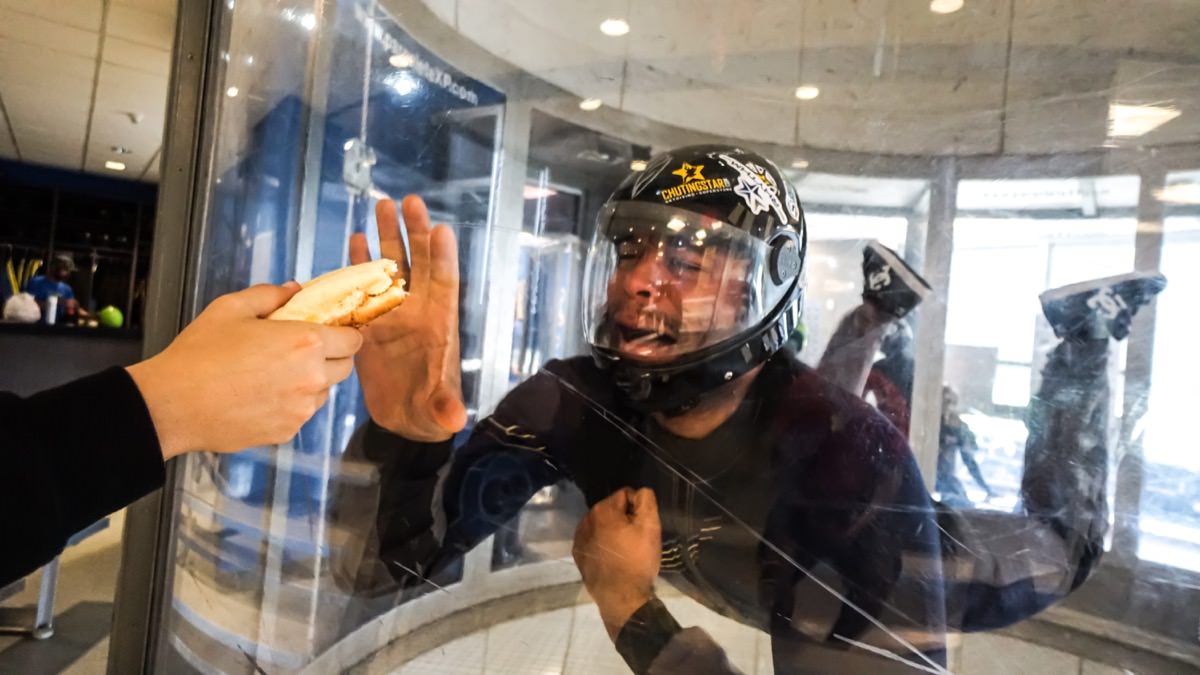 “Paraclete XP is great,” Manny says. “It’s a really good vibe here. There are a lot of fun things happening at the dropzone and at the tunnel. We have got a few guys pushing things to happen. We have a really good organizer program now at the dropzone, which I’m proud to be part of, and we’re starting to run more tunnel camps at the tunnel as well. We have got awesome planes and good facilities. The tunnel is a ten-minute drive away, so if you get weathered out, you can always go and fly. I really love it here.”

Y’know what? We love you back, Manny.

To book a flight with Manny, contact us today! You guys will get along famously. We’re sure of it.

What a great experience! Derek was a fantastic instructor and was wonderful with our whole family. Thanks for a great time, and for putting up with our mid-air catastrophes, fly always, and general chaos!
We can't wait to come back!