Bouncing Back From a Gnarly Injury With Hardcore Optimism

When we talk to SDC Rhythm XP teammate Doug Barron, he’s been bouncing around the United States with characteristic verve — first visiting family and friends, then making a couple of business trips for Sunpath (one to Arizona, to support the U.S. Collegiate Skydiving Nationals; then, to work a boogie for a couple of days). It’s only the first week of January, which is hardly the full swing of the skydiving season, but he’s already going full-throttle. 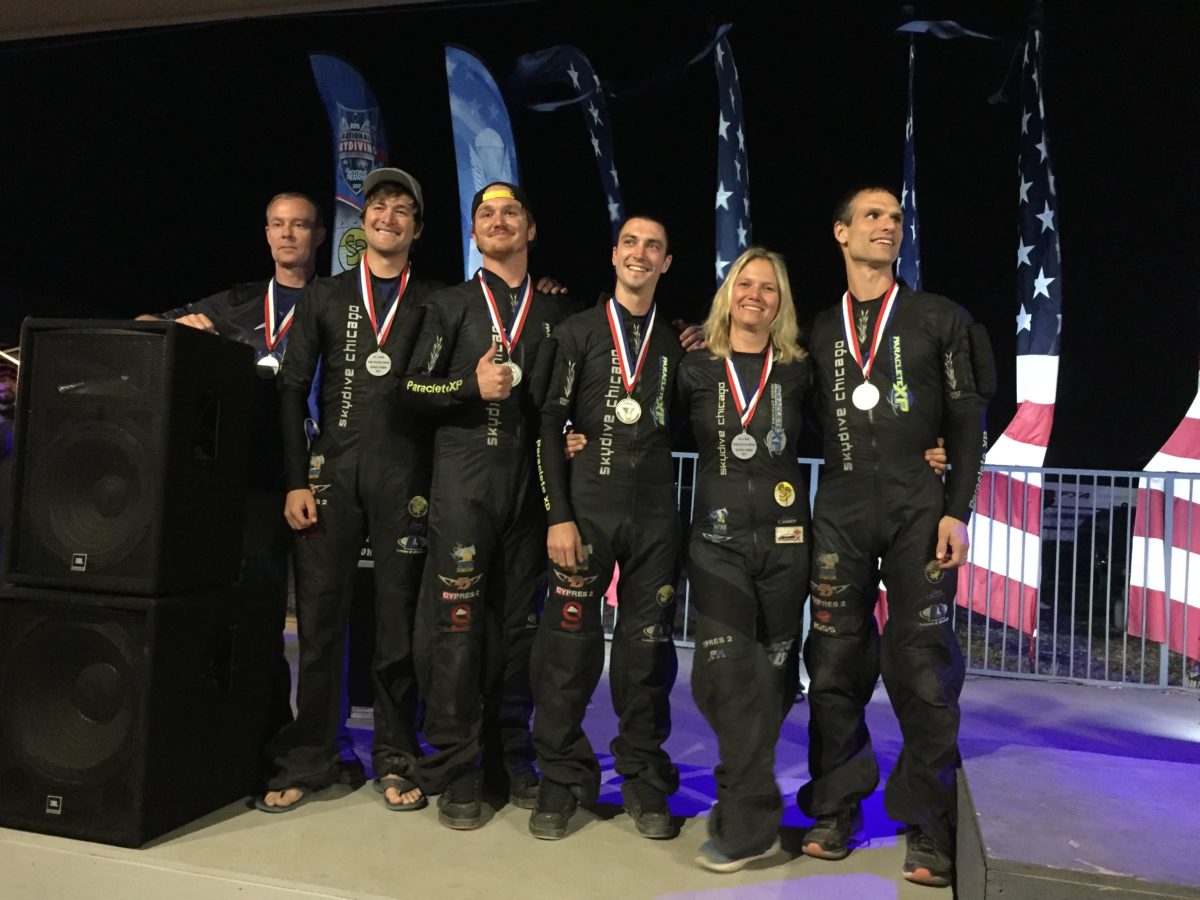 That’s typical Doug. That said, Doug is in a pretty atypical place, honestly, at the moment, which makes his current quantum level of activity something of a miracle. Why? Well, not too long ago — in April of 2018, to be specific — he nearly ended up six feet under. He did spend time in a wheelchair, which is no easy place to be for a guy like Doug. And then — more “typical Doug” — he motivated himself out of those dark days and got right back into the fray.

“Rising like a phoenix. A little bit, yeah,” Doug laughs.

The beginning of this story starts with what could have been the end. Doug was at Skydive Sebastian, on one of many training jumps for his super-high-caliber 4-way team, SDC Rhythm XP. The great news: he had absolutely dialed in his 450-degree turn. The awful news: he’d forgotten to switch his AAD from Expert to Speed mode.

“My reserve activated right as I was coming out of my turn,” he remembers. “It started with man, this is a really good turn, I’m going really fast, I’ve got the bottom dialed in, this is great…and then I felt my container open. I felt something hit my hand. Instantly, I was, like, oh, crap, this is going to be really bad.” 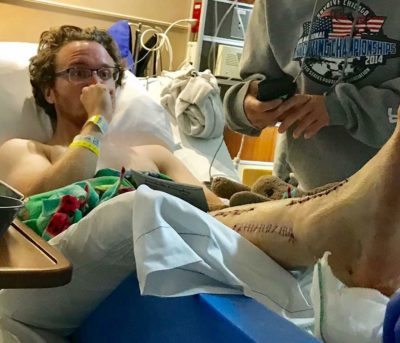 It turned into a downplane two-out. He fell about 40 feet onto asphalt. When he hit, he smashed up his right leg, his left heel and his back (at L3).

Doug was in the Sebastian hospital for three weeks. He had three different surgeries — one, the very first day. He had an external fixator put on his leg to pull the mess back into place. A couple of days later, he had surgery on his left foot to put his heel back into position and screw it back together. About a week later, he had another surgery to put all a bunch of metal into his right leg. After that — at least, for a while — the hospital was home.

Luckily, he didn’t have to do it alone.

“The skydiving community rallied around and gave me support through the hardest time of my life,” he continues. “It was really cool. It got to a point where we actually had to start scheduling visits when I was at the hospital because there were so many people who wanted to come say hi.” 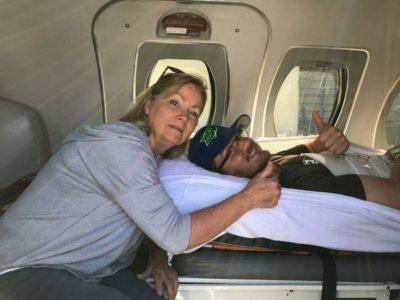 Doug spent three weeks in the Sebastian hospital, then took a medical airplane ambulance (“which was kind of cool”) back to South Carolina. From there, he moved into a rehab facility for a couple of weeks to learn how to live life in a wheelchair for the next three months — and from there to cohabit with his sister, her husband, their three boys (ages 6, 4 and 1 ½), his mom, his dad and his then-girlfriend.

“That got a little busy at times, for sure,” he laughs. “But it really drove home just how important family is. A big part of my recovery was the support I got not only from my blood family but from my skydiving family. It was amazing. Without that, I wouldn’t have progressed as quickly or maybe not even have wanted to progress. To constantly have people asking how you are doing and tell you that you can do it and that you will get better — it really helped.” 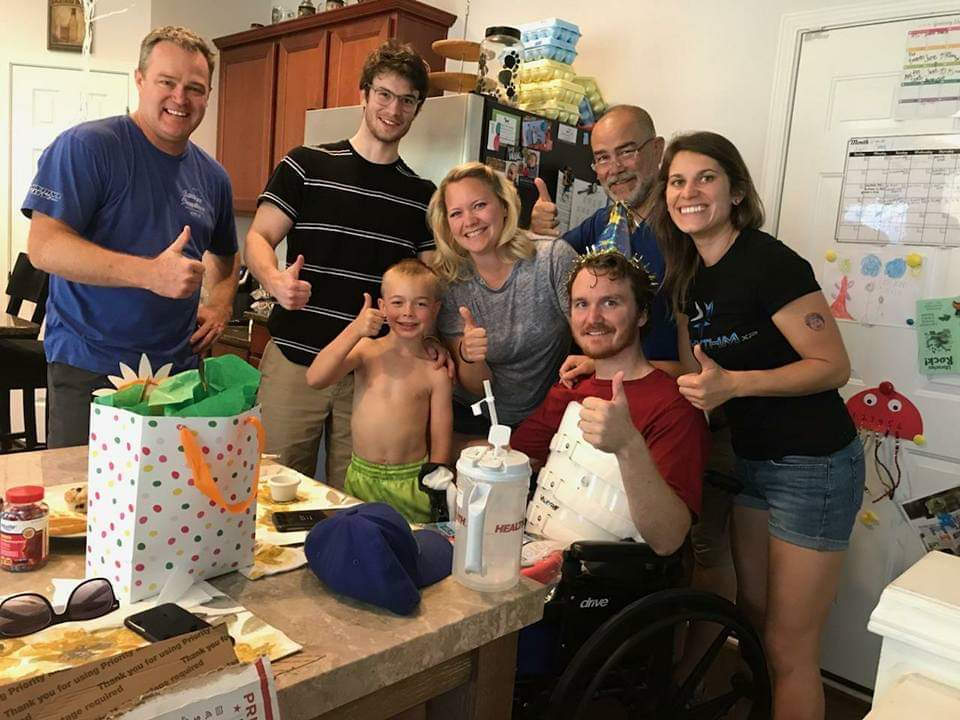 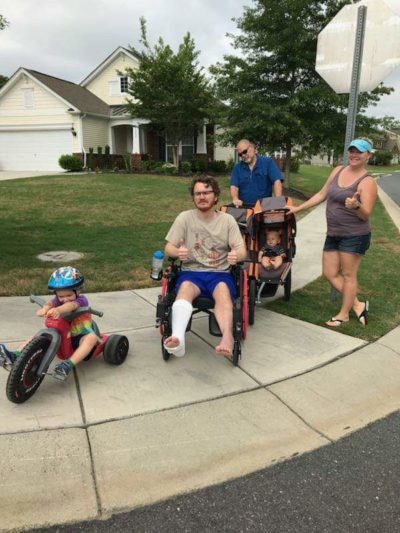 “My dad flew back down from northern Virginia to be there,” he says, “Then my brother also flew down. Then my girlfriend at the time had brought Karl Meyer up from Deland. All of these people arrived at the house at different times — at my sister’s house — as a surprise. In the morning, I would go on this wheelchair walk, and I would push myself around the neighborhood. On the morning of my birthday I was out on that walk, coming up a big hill, and that’s where I saw my dad standing there. Then I got into the house, and I saw my brother. Then Sam and Karl walked in. Just to see all these people that went out of their way to come see me on my birthday when I was in a wheelchair and everything sucked — it was a huge thing for me to see all those people there.”

“She had stickers and tattoos made up of my face in a cartoon fashion,” Doug grins, “and distributed them all over the country–and world–and, on my birthday, hundreds of people from across the globe sent me pictures of them with the tattoos via email, Facebook and texts. Even my family, who I was living with, somehow got them without me knowing. My three little nephews came in and woke me up with tattoos of my cartoon face on their arms. It was incredible.”

With all that love and support behind him, Doug felt comfortable sharing the ugly details of what he was going through in his recovery on social media — and ended up inspiring other folks who’d ended up in the same smashed-up boat. People started coming out of the woodwork to tell him that reading his posts helped them through their own injuries.

“One person in particular — who got hurt two weeks after I did,” Doug muses, “reached and said that reading what I was going through helped him to realize that things were going to get better. That they motivated him to keep moving. That was really rewarding in itself. It made me feel like I could still do something positive even though, physically, I couldn’t do anything.” 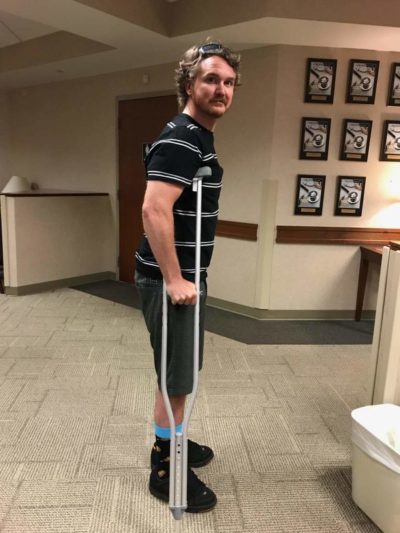 Doug, of course, didn’t stay helpless for long. Even injured, Doug still went to events. He even ran a 40-way invitational event from a wheelchair. He started walking again at the end of July — about three months after the accident — with crutches and a walker. Then he graduated to a cane. By the end of September, he didn’t need the cane. Going down stairs is still difficult — and running is still in Doug’s future — but his progress is incredible, considering the violence of the injury, and it is continual.

Today, Doug wants to give back to the sport that has given him so much. For now, he’s competing in wind tunnel events — not just here at Paraclete, but overseas as well. He plans to start jumping again in April.

“When I start jumping again, I want to run more events,” he enthuses. “I want to influence more people; I want to make this sport even safer and better for everyone. I want to be in the sport forever. I want to have a positive legacy.”

“After going through this and just seeing how much people just gave up whatever they were doing to come help and support me,” he adds, wistful, “it’s more about the people for me than it is about the medals. The people are what skydiving is really about.”

“If you talk to people about what draws them to skydiving,” he concludes, “Sure, it’s the thrill and adventure, but it always seems, on a deeper level, to be about the community; the people they meet, the adventures they go on and the experiences they have. I just want to make sure I can do everything I can to continue that, and to make that better for everyone involved. This community is very special. It’s something you don’t find anywhere else.” 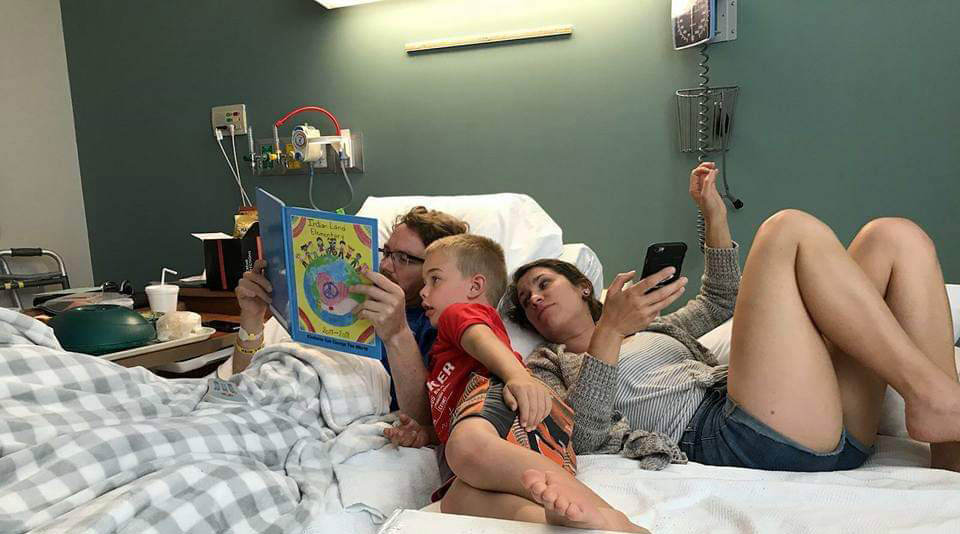 Everyone was extremely friendly,fun and helpful! We were from out of town drove three hours and were running late from bad weather we had a group of 10 and they called us to tell us to be careful in the weather and to take our time on arriving. Our instructor was amazing we had 3 three yr olds and he did an amazing job with all of them!