Preston Drake is a tunnel virtuoso and truly an asset to the Paraclete XP team, but you wouldn’t know it from talking to him. How’d he end up joining our team? Keep reading to get to know this groovy guy.

Originally from a stone’s throw away in Charlotte, NC, with a laugh Preston says, “I did my ‘adult growing up’ in Florida.” While his friends were packing up and heading off to college, at 19, Preston packed up his Jeep and headed to DeLand.

“It’s a funny story actually. Shortly after high school, my best friend Kristan Ferriman took me down to Florida. Her father bought us a tandem for her birthday. I was terrified to do it, but as soon as I did, before my feet were even on the ground, I asked my tandem instructor, Bob Crossman, how do I get to do this? How do I do what you do? I was supposed to be in Florida a week. Well, two weeks later, still in Florida, I called my job and said I’m not coming back.”

Preston continues, “It was great. I went to Skydive DeLand which is basically the Mecca of skydiving…I was very fortunate to be in DeLand to start with.”

Preston’s impressive skydiving/tunnel flying career had fairly unpresuming beginnings. “I started off working around the dropzone, taking out trash, picking up students, talking down students. Then, as one does being on a dropzone, you naturally just start jumping, and I did my first AFF November 20, 2009.”

So, how’d Preston get from the open sky to the windy tube?

Preston made the transition into tunnel flying after a jump with Sharon Har-Noy Pilcher. “She said, Hey look, I’m not gonna jump with you anymore unless you apply to iFLY.” 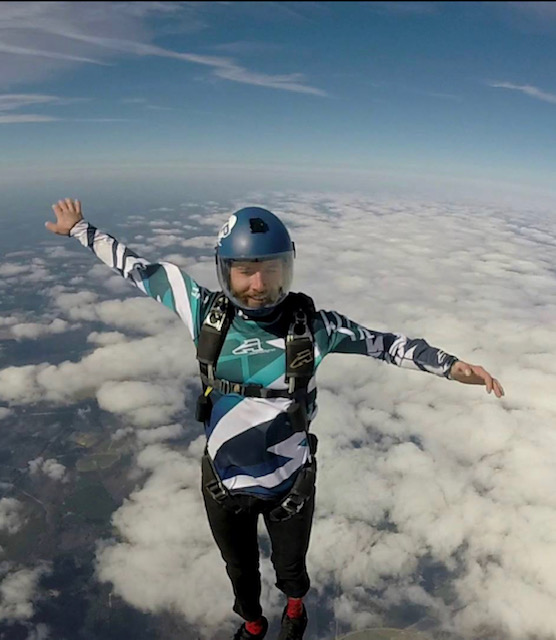 Preston’s time with iFLY took him on a cross country tunnel tour. Preston remembers, “I trained in iFLY Austin in 2013, then after training moved to Dallas to work for iFLY Dallas and helped them finish up the build on that tunnel for about a year, then I transferred to iFLY Denver, then I transferred to Orlando where I continued flying at iFLY but not working there. At that time, I was working primarily at the dropzone and coached and worked on the packing mat. Then the manager at iFLY Orlando contacted me and said they were opening up a tunnel in New York, so I helped up there with training, then from New York, I went to iFLY Fort Worth, and worked there two years, and then, finally, I came to Fayetteville, where Paraclete XP is.”

After being like a rolling stone for the better part of 9 years, Preston parted ways with iFLY. But his love affair with flight was far from over. Preston explains, “The best place to continue my flying was here (Paraclete XP). They have the tunnel and the dropzone within 10 minutes of each other, and on top of that, my family is only 2 hours from where I’m living now. I’m close to my family, my family is growing, and it’s awesome”

“I love it” he continues. “I really like it here. Raeford is kinda slow, no real city life, but I can drive 20 minutes to Fayetteville and get a little city life if I want it. Plus, I get to ride my dirt bike around with my buddies.”

Aside from the laidback lifestyle that living here offers, Preston’s favorite part about being a member of the Paraclete XP team is the camaraderie: “The team is really tight. We all get along very well. We all manage ourselves well. We make the day work, and we all help each other out. A big positive thing for any work environment is teamwork, and we have it. Our team is amazing”

Preston explains, “That question stumped me. So, I wrote something out. What is next? Next, I would like to continue advancing my skills and knowledge in all aspects of flying, while encouraging and teaching up-and-coming members of the sport. I would like to push myself to focus on this more in the future and strive to be the best I can be while figuring out a new and safe technique to flying. Learning how to apply these skills to my coaching so my students can efficiently learn to refine and develop new skills. I never want to stop learning. My true joy comes from being able to share this knowledge with others…that or run for president. One or the other.”

As a testament to Preston’s self-effacing temperament he wanted to end his interview by praising another. At the end of our chat, Preston says “since this is my first time being spotlighted for anything in skydiving, I would like to give a huge shout out to Russel (Rusty) Trapp. He paid for my first tandem and basically helped me all through AFF. He’s the man. He’s the one who basically helped me get into skydiving!”

Well, 10 years, 2400+ jumps, and 2000+ tunnel hours later, it seems Preston’s choice not to go the traditional college route like many of his buddies was the right one, and we’re glad he calls Paraclete XP his home!

Thanks so much for a wonderful first time adventure for me and my 5 year old great-niece; and also my 2nd timer niece. I felt very safe and informed through the whole process. My only wish is that we had ParacleteXP in Minnesota-with you to guide us! Thanks again for a wonderful time. We will DEFINITELY be back next time when in NC.