For some, indoor skydiving is a past time. For others, it’s a sport that requires dedication and discipline. No one knows this better than XP8, one of our home teams here at Paraclete XP. Comprised of XP regulars Kirk Verner, Andrew Happick, John D’Annunzio, Brian Krause, Steve Lefkowitz, Jeana Billings, JaNette Lefkowitz, Michelle Karamon, and Matt Davison, XP8 brought back a grand win from the World Indoor Skydiving Championships for 8-way. We sat down with one of the members, Andrew Happick, for an exclusive interview to get all the details on this awesome win.

Of this uncanny result Andrew explained: “The World Championship wasn’t on our radar because that wasn’t our original goal for the team. For the Paraclete Indoor Championship meet, we didn’t know what the Golden Knight line up would be and how strong they would be. It turned out that they had a newer lineup to compete, and we were stronger and able to beat them. We weren’t sure what their lineup would be because there was the possibility they could put the old lineup back together and be a very strong team, but either way we weren’t focused on winning that meet. I’m also not sure if everyone was aware that, that was the selection for the world championships until either shortly before or actually at the meet”

What a welcome surprise that in fact it was the qualifying competition to secure a slot at the World Indoor Skydiving Championship meet! 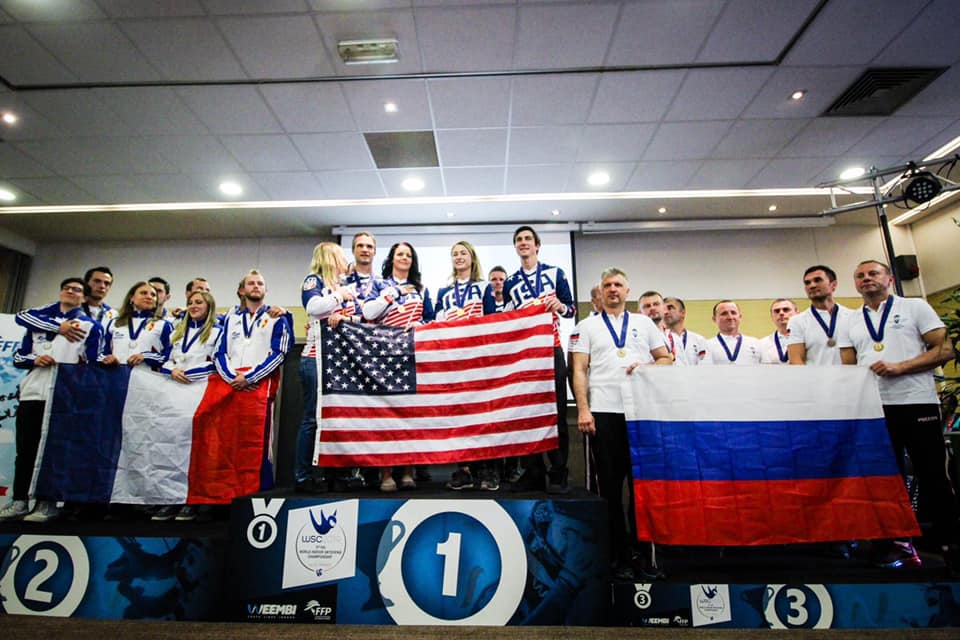 “After we won, we decided to go to the world meet. We then had to rearrange schedules and find days to train between then and the World Indoor Skydiving Championships, which was only about 1.5 months. So, we found 11 days between those two meets in that 5-6 week period. Which is a feat in itself with 8 peoples competing schedules.”

“In that time, Steve, JaNette and I already had a 4-way indoor competition in the UK, which was between the Paraclete meet and the World meet. We had to go to the UK and back, which in itself is an 8-day trip, plus the training before it. “

The team members all dedicated as much time as they could. Of course, it did help that several of the members have competed and trained together prior to this lineup.   Andrew continued, “A lot of the teammates I have competed with before. Steve and JaNette for a long time with 4 way and B.K. (Brian Krause) John D’Annunzio, and Kirk Verner from an XP8 team we did several years ago. Also, the lineup that went to the World Championships was the same lineup as XP8 for 2018, aside from myself”

As other competitors may note, there is a certain comfort level to competing with such familiar teammates. Though, for this competition and this lineup, Andrew had a different role to fill: “It was a different slot for me with this lineup, but I have competed in this slot before in prior lineups. So, I felt pretty comfortable.”

It would be wonderful if things always went smoothly, but this wasn’t the case for XP8 on their journey to France.

Andrew explained, “The journey to France started with delayed travel out of the entire east coast because of storms. So, we had to switch flights last minute as we got to the airport to try to go to Detroit, to connect through there instead of Atlanta. We made it there after several connections, but then, a lot of the team, like Kirk, John, B.K. and Matt Davison were also delayed and made it there much later in the day than they had planned. When we all got to France, the individuals that had connected through Atlanta had lost their bags, including jumpsuits and gear for the competition. Which was certainly a challenge. We landed in Brussels and we went straight to a wind tunnel in Liège, which is about a two-hour drive from the competition site in Lille, France. We ended up there because of our last-minute plans to attend. The tunnel time at the competition site (Lille, France) had been completely booked for about a week prior to the competition. Luckily, there was a tunnel within driving distance that was a fair replica of the one we’d be competing in. It was good we were able to train there for the evening we arrived and the next morning. Though, we had to do it with borrowed gear. Thankfully, other competing teams were practicing in Liege, and we were able to borrow items from them. The only time we had in the actual competition tunnel was a three-minute speed check/practice time that each team got.”

For those who don’t know, a speed check is very important for indoor skydiving.

Andrew continues “we had to quickly assess our speed setting and find the balance there. Every tunnel is different with the percentage they are operating, which controls the wind speed. So, if it’s a tunnel you are familiar with, then you are familiar with the percentages. Even a half percentage change in the power can be a big difference as far as wind speed. Of course, you don’t want the wind speed to be too slow or too fast to what the team is used to. That can greatly effect flying. So, you really want to get that dialed in.”

Despite the challenges, the team made the most of their experience:
“Because of the travel time and having a day off, gave us a little time to explore the area. We were able to see downtown Lille for a half of a day, and one day we were able to go to Bruges. We only had an hour and a half, so we essentially ran around Bruges. We saw some shops and took a little boat ride on the canal. Then ran back and got in the car and drove back to the tunnel” 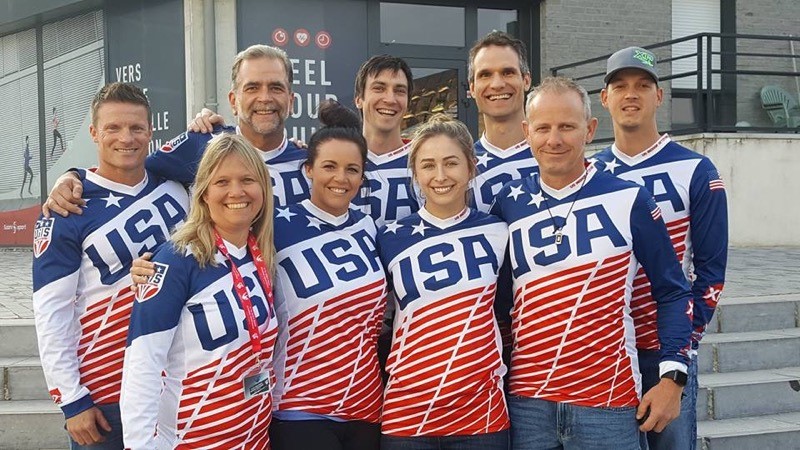 What does this World Championship winning indoor skydiving team have in mind? Winning the FAI World Parachuting Championship of course:

“Our plan for the team was a two-year project to win the FAI World Outdoor meet. So, we have a training schedule set for the year. In the last three days we’ve done 34 jumps and have tomorrow as well. Ultimately, our goal is to take home the gold for 8way FS at the FAI World Parachuting Championships in 2020”

Seems there’s no rest for winners and no lounging on your laurels. And you know what, we wish XP8 good luck!

Absolutely awesome experience! We got the buddy package and my buddy was super nervous.. But we had a blast. Not to mention the staff were so welcoming, assuring, and encouraging. We felt so safe with them! Thanks Manny!