You’d be hard-pressed to find a more humble legend around the tunnel than Brian (BK) Krause. A former Golden Knight, world champion, and current member of the 8-way team, Airspeed XP8, that will represent the U.S. at the World Meet later this year, BK has been a long-standing figure in competitive formation skydiving. So how did this top-tier competitor get his start? 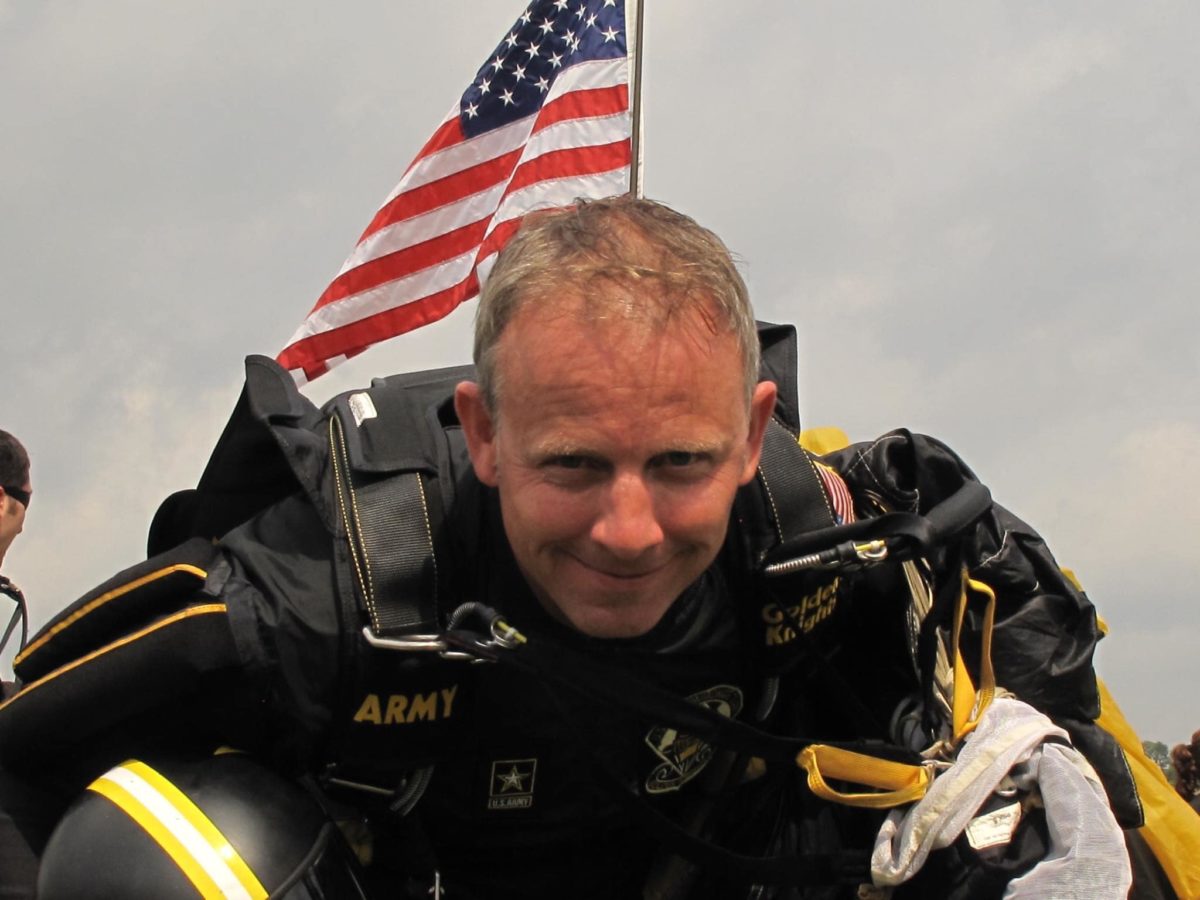 Like many, BK’s foray into skydiving began with a call to action. Early in his career in the army, BK lived in the barracks, and at the start, for BK and the other men that shared these quarters, skydiving was “just talk”:

“We always talked about skydiving. It was always “Hey let’s go skydiving”… and really, all we did was talk about it. But I had a friend that said, “All we ever do is talk about this. Now it’s time to do it.” Well, the 82nd Airborne Division had a club, which allowed you to learn to skydive at a reduced rate because some of the cost was offset by the army. So, I went out and went through static line progression… I was taken by it right off the bat.”

During one weekend, while BK was at the 82nd Airborne Division club, something unusual caught his eye.

“I noticed some guys that had Army on their rigs. I thought “Why would you have Army clothes on? It’s the weekend, and we’re all skydiving here. A guy I knew named Ed Spears told me they were the Golden Knights. Granted, I had been in the Army a few years at that time, but I had never really heard of the Golden Knights. Ed told me that I could [be a Golden Knight]. So, I started accruing jump numbers, and I became part of the team at the 82nd Airborne club.” 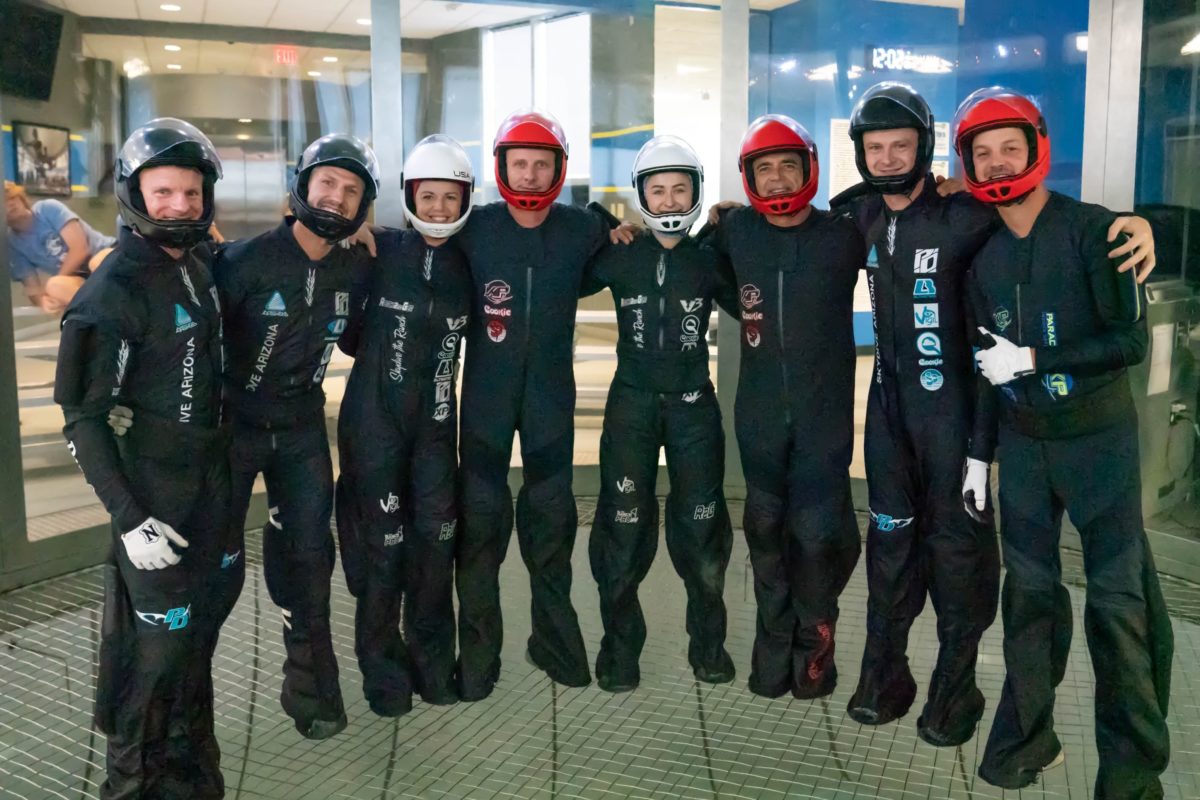 To make it through the Golden Knights selection process would take more than skill. He elaborates:

“Believe it or not, your jumping skills are not as important as your ability to learn. If you showed the ability to learn, the Golden Knights had all the assets to teach you. I think more than that, you had to be a good teammate and a good ambassador of the Army. The Golden Knights spend a lot of time together, you have to be able to get along with the people you’ll be spending time with. When you’re out in America, you have to present a good face and a good attitude because you are representing the United States Army.”

BK’s journey to the Golden Knights was filled with its fair share of trials and tribulations. Two years in a row, BK sustained injuries during the tryout process that would prevent him from joining the Golden Knights.

“Everything you do in the selection process comes down to time. You have to do everything better and faster than you did the previous day. Well, we used to have these canvas packing mats, and there was a guy struggling to pack up quickly and throw one in the back of the bus. I went to help him and as I reached for it, I pulled my shoulder out of joint. I went back the next year to try out, and during that interim year, I’d done a lot of accuracy training with the 82nd Airborne Team. Unfortunately, during tryouts I got really greedy to land on a target, I stalled my canopy, and I crunched myself. I was devastated.”

Though his efforts had been initially thwarted, BK would not be dissuaded. When given the chance to help out the Golden Knights, he took it.

“A couple of months later, I got a call from the Golden Knights asking me to come to the team to support the Style and Accuracy team with video. So, in February I left the 82nd Airborne Division and went to the Golden Knights. Even though I was technically a part of the team, I still went through tryouts to be assessed, and I was finally “knighted”.”

Of particular note for BK is also the 2019 National Championship. BK explains: “Everything I had won, I had won as a soldier. In 2019, after I jumped back in the sport full-time again, to win that with my XP teammates was important. Besting the Golden Knights in 8-way was a particular highlight as they are the best in the 8-way game.”

As successful as BK’s career has been, it’s of particular note that he did not initially consider being a competitor: “I never planned on competing in skydiving, but I saw these opportunities to win. At no time in my life growing up did I think I’d be a world champion at anything. It was never on my radar.” 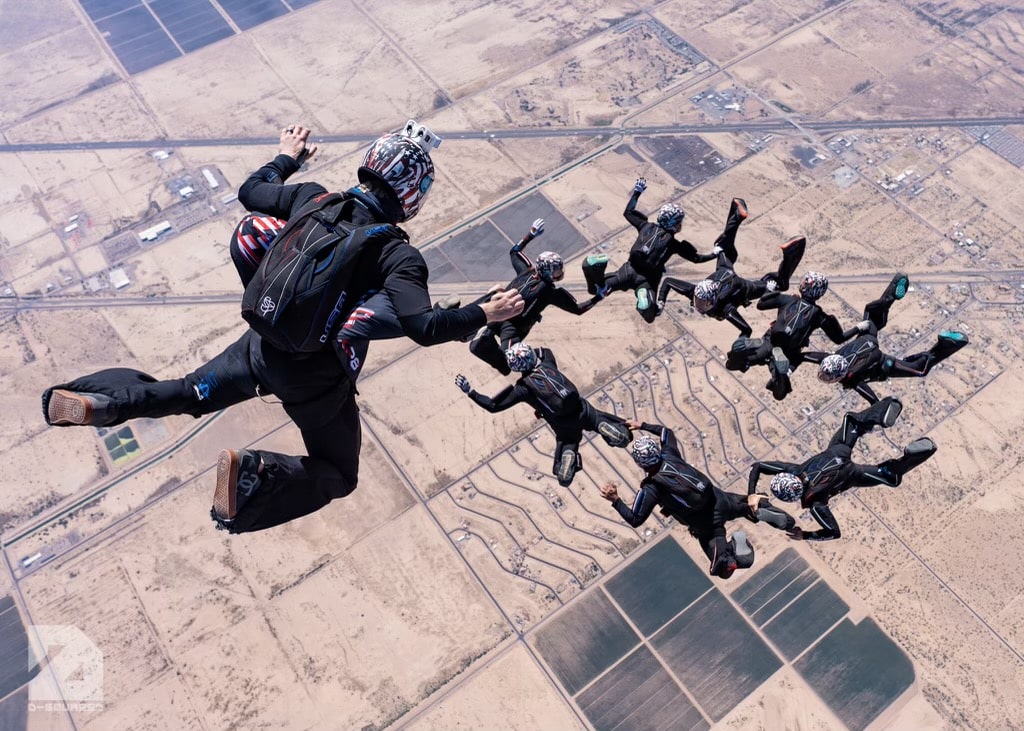 The Mindset of A Competitor

Undoubtedly, competition requires mental fortitude. With children, a wife, and a life outside of skydiving, how does BK attain the focused state that’s crucial to competing at an elite level?

“I try to do my best in order to give my teammates confidence in me. When we have confidence in each other, we can make our biggest gains. I give everything I can on each jump. I run on emotion and heart.”

Ever humble, when asked what has enabled his success, BK immediately redirects the credit:

“I give credit to those around me more than me. People inspire you, especially right now. Think of [my teammates] Jeana and Michelle. They are young in their career, and they are out putting all this work in. The same with the Airspeed guys. Right now, they are doing double duty. I’m inspired by them, and so I want to inspire them. How do I do that? It’s not by showing up lackadaisical and without care. I have to come hard-hitting and ready to play.”

A lot goes into preparing for a world meet, and as Airspeed XP8 prepares for the Mondial, BK shares something he is actively striving to do differently this go-round.

“I’m really trying to enjoy it. In Dubai, the Golden Knights and Airspeed did a double Excalibur sword formation. I told the guys to take time, look around, and enjoy themselves. I realized that in trying so hard to win sometimes I didn’t step back and enjoy the journey that we all had taken together to arrive on top of the podium. My competitiveness can almost be a fault. I didn’t realize until we won in Dubai, I didn’t take the time to enjoy the ride with my team. So now, I’m really trying to enjoy myself.” 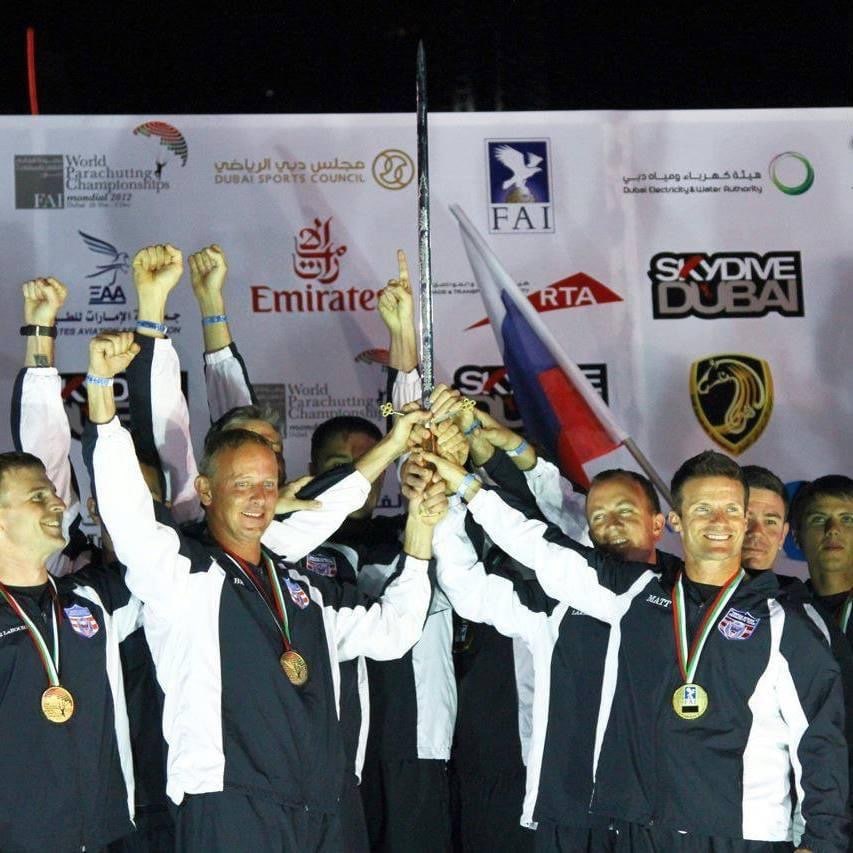 Though within his story, lessons of tenacity and perseverance as precursors to success abound, a final bit of advice BK offers to jumpers that are new to competitive skydiving has implications that, likewise, extend beyond performance in the sport. If success is what you’re after, BK encourages you to  “work hard and never just be happy with where you are at. Surround yourself with people that are better than you because they will bring out the best in you.”

For those that have had the pleasure of working with BK, his ability to bring out the best of those around him is second to none. Feeling inspired to fly? Airspeed XP8 has several 4 on 4 camps where you can have your chance to train with champion skydiver BK.

Everyone was extremely friendly,fun and helpful! We were from out of town drove three hours and were running late from bad weather we had a group of 10 and they called us to tell us to be careful in the weather and to take our time on arriving. Our instructor was amazing we had 3 three yr olds and he did an amazing job with all of them!